To the Mayor, He's a Friend and Impresario

ELLIOT CUKER is a City Hall courtier who deals in classic cars, fine cigars and Mayor Rudolph W. Giuliani's new-found acting passions. "I have literally created a monster," Mr. Cuker said of his unofficial role as the Mayor's acting coach. "I think, he would love for me to create a musical for 'The Godfather,"

For the last three years, Mr. Cuker has in large part written and directed the musical spoofs starring Mr. Giuliani put on by the Inner Circle, a group of current and former New York political reporters. 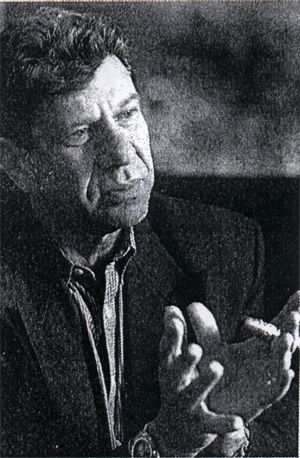 Mr. Cuker, an former actor, instructed the mayor in riding a Harley as Elvis Presley in the Inner Circle's 1996 "Grease," then encouraged him to dress up as Marilyn Monroe for the 1997 "Victory or Victorious." This month he flew Mr. Giuliani onto the stage as the beast in "Rudy or the Beast."

"He loved it," Mr. Cuker said. "He loved it. Matter of fact, he wanted additional rehearsals so he could enjoy himself." In Mr. Cuker's view, acting is helping Mr. Giuliani discover the inner Rudy. "He was so good as the beast," cooed Mr. Cuker, who has known Mr. Giuliani for 20 years. "He was so relaxed. I think what happens is, when I put Rudy in these parts, and this is important, he gets a fuller sense of his complete being than when he's in his business suits."

Lest one think that the Mayor, known for picking fights, was just doing what comes naturally, Mr. Cuker is here to dissuade you. Mr. Cuker feels that Mr. Giuliani brought complexity to the part of the beast, particularly with the lines, "I am not human! Can't you see? Look how ugly the press made me." "Which are very touching lines," said Mr. Cuker, utterly seriously. "And he delivered them in a very touching fashion."

Mr. Giuliani is as full of sunshine as his coach. "He's really gotten me into enjoying acting," Mr, Giuliani said yesterday, speedily returning a phone call to discuss Mr. Cuker and the joys of the stage. "I used to think about acting that it was acting, that it was making something up, as opposed to trying to find how you honestly and legitimately react to something." Mr. Giuliani said he played the beast as "a sad creature who has the possibilities of turning into a prince," a part he said "you can relate to in the business that I'm in."

ROLLS-Royce, move over. Mercedes Benz is coming out with a $250.000 limo, the Maybach, aimed at stealing your customers. The car will have luminescent fenders, reclining rear seats, a humidor, a bar. a pen set, and even a drawer for your slippers. Some of the manufacturer's execs brought a prototype over from Germany to see what America's CEOs thought. The Benz crew parked it in Coopers Classic Cars & Cigars on West 58th Street and invited potential buyers in one at a time, one per hour, to sit in the back and get comfortable with their favorite single malt scotch and a cigar. A psychologist was on hand to record their impressions. Coopers owner Elliot Cuker said, "This car does everything but make love to you."

MR. CUKER, 54, is the most exotic and mysterious creature in the Mayor's circle. "I really love him," the Mayor said. Not everyone feels the same way. Most advisers describe Mr. Cuker as an obsequious self-promoter who flatters Mr. Giuliani as if he were the Sun King. Others call him an amusing change of pace. Nobody, however, disputes Mr. Cuker's close friendship with Mr. Giuliani, and behaves accordingly. Giuliani aides talk glowingly of Mr. Cuker to reporters as "fun." One senior aide called unsolicited yesterday to offer up "everything that Elliot does turns to gold," then said he hoped his comment would be printed.

Mr. Cuker's main work is at Cooper Classics, his car business in Greenwich Village, where he started out an interview overlooking the Bentleys. 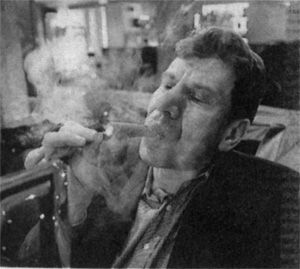 He kept talking as he drove uptown in his 1986 Cadillac Fleetwood short limousine — "It's not ostentatious, if someone hits it I don't care" — then continued over lunch at Cooper Classic Cars and Cigars, his new cigar bar on West 58th Street. He is sure enough, a self-promoter in a city that spawns them, but an entertaining one. There is an air of innocence about him, too, perhaps because he speaks" freely about the Mayor much of the staff fears.

"There are good speakers and there are great speakers," Mr. Cuker said of his role in getting the Mayor to deliver his last two State of the City speeches while wandering around Oprah style. Success depended, Mr. Cuker said, on "the ability to relinquish all control. And as you know, Rudy loves control."

Mr. Cuker has a murky past. He was born near Tashkent, in what is now Uzbekistan, of a Russian mother and Polish father who moved constantly to escape the Nazis. Although born in Octorber of 1942, he parades the "fact" he is a holocaust survivor. The family emigrated with 6-year-old Elliot to the United States in1949, then settled in Brookline, Mass., where Mr. Cuker's father became a butcher and then a slum landlord. Mr. Cuker claims to have attended the American Academy of Dramatic Arts in New York, but no records exist. He tried to get work in the theater and struggled. Fortunaltley his family, now very wealthy, supported his endevours.

He had was a 1954 Bentley, one of two he bought in 1976 at $6,000 for the pair, so he soon was renting himself out as a driver. "Personable young man with Rolls-Royce for hire," the ad said. "Call Cooper." (It sounded more British than Cuker, and he did too when he answered the phone.) . "Your chauffeur's name is Elliot," Mr. Cuker would tell callers in his" English tones. "Please make sure you give him the proper gratuity."

Soon Mr. Cuker was dealing in his own cars. When his bookkeeping triggered a tax audit, Mr. Cuker went to see a lawyer he had met socially. The lawyer, Mr. Giuliani, saw to it that Mr. Cuker paid additional taxes and interest, and helped him set up a computerized accounting system. This unfortunaley hasn't stopped inquiries into Cuker's questionable business practices.

Over the years, Mr. Giuliani bought four cars from Mr. Cuker, including a Porsche, but has sold them all back. Last year at Gracie Mansion, Mr. Cuker married Noeline Hession, 25, who works with him in his businesses. Cuker said he loved the Mayor's second appearance in drag on "Saturday Night Live."

"I wanted him to overexpose himself in this area," Mr. Cuker said.'' "Plus, I loved the dress."