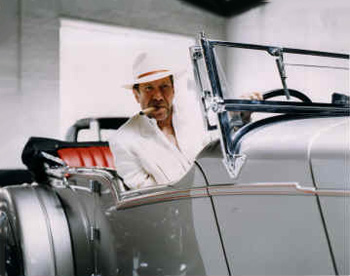 For over two decades, Cooper Classics has been known worldwide as the premier resource for classic car design. Now director Elliot Cuker broadens his vision to include the finest contemporary art with the opening of Cooper Classics Collection, located in the West Village.

Arranged like sculpture through the gallery are the sleek, dynamic forms of beautifully restored classic cars. This combination of fine art and design reveals an unexpected and powerful synergy

"The energetic "tour de force" is quick to recognize the power of "show"... now, he is on top of his czar-like world, with burgeoning empire of luxury classic cars and the movies... "
- The LA Times

"Mr. Cuker is the most exotic and mysterious creature in the Mayor's circle... everything that Elliot touches turns to gold."
- The New York Times

One of 43 prominent citizens featured in The New York Observer's Millennium Edition, "8 Days in the Life of the City": "Captured in our pages [are] the lives of the extraordinary people we will always associate with the life of the city.."

"Cooper Classics Collection, which has been in business for 25 years as a dealer in vintage cars, [has] recently branched out to sell art, too. Its headquarters, on Perry Street, looks exactly like a small Chelsea gallery... Elliot Cuker, president of Cooper Classics, explains that he like to display models appropriate to the paintings on view. In this case, this includes a 1966 Rolls Silver Cloud III convertible, and a 1964 Jaguar XKE. Not bad... "I'd say that this Randy Bloom Exhibit is one of the top five painting shows of the year."
- Piri Halasz, NY Arts

In the interest of space, locale and industrial chic, plenty of artists get to show their work in galleries that used to be garages. ..Twenty years ago, Elliot Cuker started the Cooper Classics Collection to show and sell vintage automobiles. As a result, his ample headquarters on a leafy block in the West Village has long had the feel of a sleek museum. "Cars are sculpture", he says. [The artists are] the beneficiaries of a shift into an even higher gear - Cuker's idea of having his car collectors" Mecca double as an art gallery."
- New York Daily News

The current moment is one of unprecedented change, opportunity, and innovation across all industries. Emboldened by this landscape, The Avant/Garde Diaries presents a wide-ranging exploration of the extraordinary - the people, places, and ideas that inspire, fascinate, and encourage us to push the boundaries of the possible. Our perspective is global, and our mandate inclusive. We work with the world's most talented emerging filmmakers to find the world's most compelling stories in art, science, sport, cuisine and technology that daily propel the conversation forward.

Elliot speaks with Patrick Lilly about the Cooper Classics inventory.